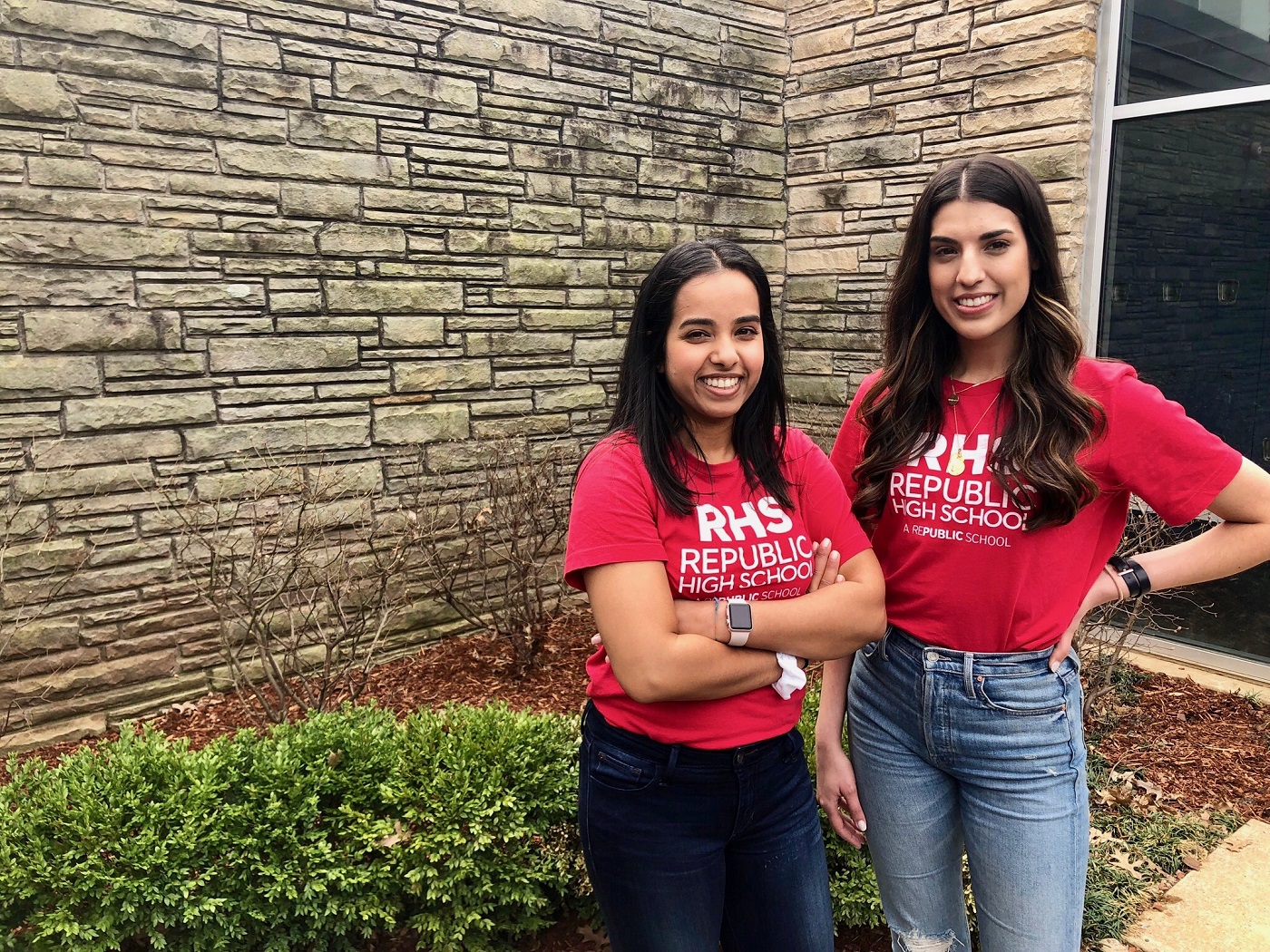 Walk into the Cato Center at RePublic High School and you might think that you are at a startup in Silicon Valley. Classrooms are enclosed by garage-doors that easily slide up to create more space. Students work on group projects in smaller conference rooms that promote collaborative learning. The 21st-Century design is as forward-thinking as the RePublic computer science program itself. In fact, all students take their two most important computer science courses in this space. What’s more surprising? Both of these classes are led by women of color.

Ninth graders start their computer science experience learning Intro to AP Computer Science with Namita Manohar before moving onto AP Computer Science Principles as tenth graders with Mehreen Butt. Although neither woman studied computer science in high school, both had a strong interest in the sciences. Mehreen went to the University of Rochester where she majored in biology, and Namita went to the University of North Carolina where she majored in chemistry. Both women are passionate about ensuring all scholars are encouraged to pursue computer science, especially their female scholars.

According to research from Accenture and Girls Who Code, “researchers found that computing appeal for girls peaks in middle school, where having an inspiring teacher and thinking that coding is ‘for girls’ are instrumental in sparking interest. The appeal dips in high school in what researchers call the ‘high school trap’ because of a lack of friends in coding classes or the lack of those classes at all.” RePublic High School is reversing this trend. Namita and Mehreen, who are leading the charge at RePublic High School, shared the importance of coding for girls, especially young women of color.

What drew you to work in education?

Namita: “I got into education when I joined Teach for America Eastern North Carolina where I taught high school math at Weldon High School in Weldon, North Carolina. Growing up in North Carolina, I received a high-quality education attending a private school and a high-achieving high school. However, I first saw the inequities that exists in education after visiting my mom’s kindergarten classroom. She taught in a low income school and it really opened my eyes to the resources that some schools and communities received and others did not. While I was in college at the University of North Carolina at Chapel Hill, I volunteered with an after-school program called Communiversity for four years that catered to K-5 students of color that really showed me the impact I could make in education.”

Mehreen: “Growing up, my parents taught us that education is the great equalizer and really fought for my siblings and I to go to the best college-preparatory schools. As an undergraduate, I volunteered with the University of Rochester’s tutoring program at a public elementary school. During my commute between campus and downtown, I noticed the disparity in resources between our city-school system and the private university that I attended. It made me aware of how zip code affects school-funding and student achievement. As a science major, I was especially interested in the intersection of education and health care, and I wanted to see what that looked like first-hand as a teacher. In 2013, I joined Teach for America Greater Delta: Arkansas & Mississippi and taught high school physical science at Terry High School in Terry, Mississippi. ”

Why did you decide to join RePublic Schools?

Mehreen: “During my Teach For America experience, I became incredibly interested in the education technology space. I strongly considered moving to the Bay Area, working for a startup, and leaving the classroom. When I introduced an Hour of Code activity to my high school students back in 2014, I found that I really enjoyed it and knew that I wanted to solely teach in that content area. Working for RePublic not only offered me the opportunity to teach, but also to really get in at the ground-level and help build a program. If it wasn’t for that experience, I might not still be in the classroom today.”

Namita: “Being a former math teacher, I believe in the importance of problem-solving and how it applies to other industries and content areas. I was impressed by RePublic’s commitment to computer science education and their initiative to offer rigorous courses to all students. I joined RePublic High School in July 2016. Being able to work with Ms. Butt to close the gender and racial gap in computer science has allowed for us to have a stronger impact.”

What has it been like to lead the computer science work at RePublic High School?

Mehreen: “After we both joined the RePublic High School staff in July 2016, we made it our mission to close both the gender and racial gap in computer science. I think our program has been successful because not only are we putting a ton of work into the program, but our students are equally invested.”

Namita: “I totally agree. Our students’ continued interest in computer science has made us more successful. I also think the bond Mehreen and I have has made us stronger teachers so that we can better support our students and their interest in STEM. The consistency that we have provided for the past three years has allowed us to take the curriculum and adjust lessons to be relevant to students and their lives. ”

Mehreen: “Our program goes beyond the classroom. Over the past three years, our girls have been recognized as winners in Tennessee for the National Center for Women & Information Technology award, the Congressional App Challenge, the Samsung Solve For Tomorrow Challenge, and a local pitch competition. Students are also strongly encouraged to apply for summer internships, scholarships, and STEM camps.”

Statistics show that there are not many female educators of color teaching young women of color to code. What does that feel like?

Mehreen: “I feel empowered, especially given the inequities that persist in our country and in the South. It’s not just about equipping our students with 21st-century skills but really preparing students to join a workforce that may not be reflective of their racial or gender identity. In order to fix these disparities in the tech industry, it will take continued efforts to support our scholars, especially our female scholars of color.”

Namita: “I definitely agree. I think it is important for girls of color to code because it not only opens up career opportunities but equips students with problem-solving and critical thinking skills that can be used beyond the classroom. Representation matters, and with the tech industry being dominated by white males, our kids will have the power and skills to change this. ”

Mehreen: “When I first started teaching computer science, I did a lot of research on how to get more girls involved in coding. Research finds that one of the greatest factors in encouraging girls to stick with it is a teacher who believes in their ability. That really has stuck with me over the years. I often think about what it means to be a double-minority in the tech industry. The reality of how wide the gap is for women – especially women of color – reminds us of how important it is to actively create pathways for our girls.

What are you most excited about when you think about your scholars entering the STEM field?

Mehreen: “We’re still in this age of “firsts” – where being a female leader of color creates headlines simply because people are surprised a girl could ‘do it.’ This is even more pronounced when we look at the tech industry. I am optimistic that this will change the more we support girls’ persistence in tech, and that ultimately, more products, companies, and industries will represent the diverse lived experiences of our communities. And our scholars are going to be the leaders of that movement. ”

Namita: “It makes me excited to think about the impact our students will have in the tech space. They can take what we have taught them and really inspire others while creating diversity and inclusion in a field that lacks it. Just knowing that I was even a small part of their story and future makes the hard work worth it.“