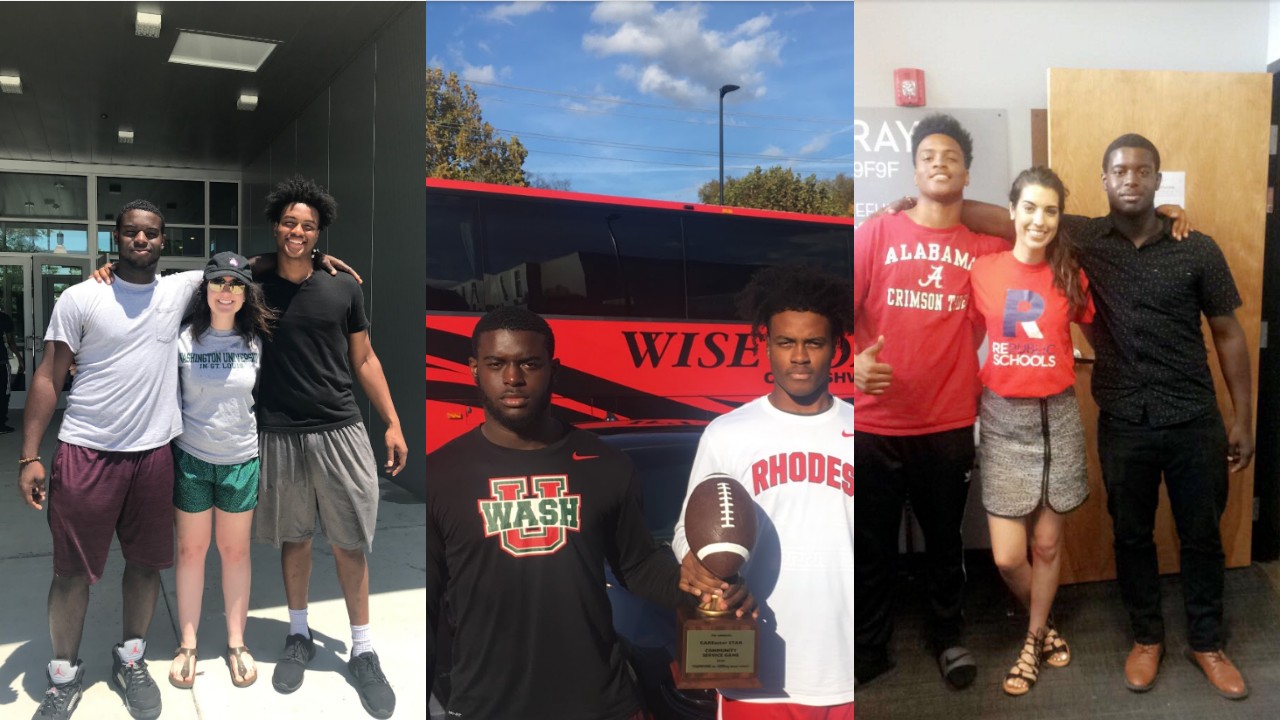 Looking at him now, it is hard to imagine Jau’Von was ever small enough to be a fifth grader. Even when he slouches, he’s easily 6’ 2,’’ and his stature clearly conveys his capacity as captain of both the varsity football and basketball teams. Jau’Von belongs to RePublic’s inaugural class of seniors. At this point, Jau’Von is used to being the first. He is part of a cohort of scholars who built this network starting in 2011. His walking across the graduation stage on May 19th is a moment eight years in the making.

Jau’Von was one of the founding scholars at Nashville Prep, one of RePublic’s flagship middle schools. At the time, Jau’Von and his family took a huge risk, betting on a school that did not even have a building or buses yet, but promised something better than the family’s current choices.

To the adults who have watched Jau’Von and all our founders grow up, that first fifth grade year seems like it was just yesterday, but as a senior, Jau’Von struggles to remember specific moments from that time. Instead, he recounts with ease the impact his Nashville Prep teachers had on him. Jau’Von can still do the Wake Forest 5 cheer that Ms. I taught him. He remembers how his sixth grade reading teacher Ms. Rua ALWAYS had a book on her and how Mr. Richards could launch the kickball over the fence when they played during P.E. He remembers aphorisms too, in particular how Mr. G would say even in thunderstorms or snow that “it was a beautiful day to read.”

During Jau’Von’s eighth grade year, Nashville Prep and Liberty Collegiate Academy joined forces to form RePublic Charter Schools. RePublic set out to reimagine public education in the South and plans for a new high school gave Jau’Von the chance to be a founder once more.

Jau’Von’s first RePublic High School friend was another scholar who knew what it meant to found a new school. A friendly rival and pacing partner to Nashville Prep, across town, Liberty Collegiate Academy opened the same year. One of the founding fifth graders was Larry. If you’ve been to the high school in the last four years, you’ve probably run into Larry or at least heard lore of his character. Exceptionally bright and charismatic, Larry brings an unparalleled spirit and enthusiasm to everything he does, be it on the football field , in one of his four AP classes, or while wearing a wig at a lip sync battle.

Larry and Jau’Von seemed in many ways destined to be best friends. They met during football practice before their freshman year, and each sized the other up to be the literal and metaphorical “big men on campus” from middle school. It had not always been that way for Larry. Larry remembers being small and skinny in fifth grade, a time when everything felt, and was, brand new. Like Jau’Von, Larry remembers his teachers more than specific moments. Mr. Pedinoff made them do the Gangnam Style dance each gym class. Larry describes his frequent visits to Ms. Lentz’s office, where even when he was in trouble she would remind him that “you are such a bright kid.” Larry still remembers the gestures of his teachers and particularly relishes the opportunity to perform the mannerisms of his sixth grade math teacher, Mr. Burgevin.

“WHILE SO MUCH HAS CHANGED SINCE REPUBLIC’S FOUNDING, OUR SCHOLARS HAVE REMAINED THE STEADFAST, BEDROCK OF THIS INSTITUTION. THEY ARE THE MEMORY KEEPERS OF OUR ORGANIZATION, AND AS THEY PREPARE TO MOVE FORWARD INTO THE WORLD, THEY LEAVE BEHIND SCHOOLS THAT THEY’VE CARRIED ON THEIR SHOULDERS FOR EIGHT YEARS.”

As seniors, Jau’Von and Larry comfortably navigate the school they helped found. Each knows he has left an indelible mark on the institution, and they work purposefully to guide the underclassmen they mentor. Both mention how they strive to show others how to be good people; that how you do anything is how you do everything, so if you try to do everything right you won’t have much to worry about. In particular, they want to show the younger boys in the school that it is okay to drop the “tough guy” persona and to just be yourself, laugh, and joke. Both are trying to instill lessons that took them years to learn. They want to inculcate the value of connecting to your peers and how that gets you SO much farther than being a jerk to everyone.

Talking with Larry and Jau’Von, it is incredible to see the level of introspection they have achieved at such a young age. Founding RePublic Schools has been an eight-yearlong challenge for each, but nearing the end of the road, both are poised, confident, and ready to take on the world. When I spoke to them together about their friendship, they began by jokingly fighting over who was stronger than whom but quickly pivoted to the shared beliefs they say define their friendship: leading by example, setting a positive tone in school, prioritizing academics, and not feeding into stereotypes. Both are deeply cognizant of how society sees them and know the undue burden placed on their lives as black men. Larry voiced how he wants the opportunity to “show people the opposite of what they think of us,” and Jau’Von added on that “just because we’re black, doesn’t mean we’re thugs.” Each talks about his goals in life beyond high school and beyond athletics, rooting their ambitions in the chance to be a role model for other kids like them.

Both Jau’Von and Larry have already been accepted into colleges, and no doubt, each will have more acceptances in the months to come. They say that even if they do not commit to the same college, they will be back at RHS together. Larry in particular sees himself as a future RePublic Motivational Speaker. Even after all they have given to RePublic Schools, they are still eager to do more in the future. While so much has changed since RePublic’s founding, our scholars have remained the steadfast, bedrock of this institution. They are the memory keepers of our organization, and as they prepare to move forward into the world, they leave behind schools that they’ve carried on their shoulders for eight years. Their impact on the world is just beginning though, and we can’t wait to see what comes next.

Moira Moynihan is currently a teacher at RePublic High School and has had the exceptional privilege of being Larry and Jau’Von’s teacher for the past three years.